Utah (3-1) at UCLA (4-0) Oct. 4, 10:30, ESPN Here’s The Deal: Utah and UCLA flipped the script in Week 5. The Bruins, wildly inconsistent in the first three games, finally played up to their preseason hype by hammering Arizona State in Tempe, 62-27. Now, UCLA must prove that it’s not the kind of fair-weather team that selectively turns up the intensity when everyone is paying attention. The Utes gained a head of steam for the first three-plus games, and then squandered their momentum by blowing a 21-0 lead to Washington State … at home. Utah needs to answer the call immediately, because the rest of the schedule has fangs.
Why Utah Might Win: Which UCLA team shows up? The one that performs with intermittent consistency almost lost to Virginia and Memphis. And the Bruins could be a little unfocused this Saturday after hearing for the past week that they really are special after all. The Utes have already proven they can win on the road, and their defense will cause problems for the erratic UCLA front wall. DE Nate Orchard and LB Jared Norris will have regular meetings at Brett Hundley’s doorstep.
Why UCLA Might Win: The Bruins have the better talent, but they also have the better frame of mind. While Utah is devastated following last week’s collapse to Wazzu, UCLA is as confident as it’s been all season. The Bruin offense displayed pop and balance, thanks to the running of Paul Perkins, and the defense will contain a slumping Ute attack. Linebackers Myles Jack and Eric Kendricks, in particular, will keep the ball in front of them, preventing long gains.
Who To Watch Out For: Non-offensive touchdowns have a penchant for changing the tide of a game. And UCLA and Utah house difference-makers in Ishmael Adams and Kaelin Clay. Adams has scored three times this season, including on a pick-six and a kick return last week in Tempe. Clay leads the country with four special teams touchdowns, three on punts and one on a kickoff.
What’s Going To Happen: UCLA isn’t out of the woods yet. The Bruins are still a team that’ll be prone to inconsistencies and erratic behavior. But Utah coming off a demoralizing loss is a favorable draw for the home team. The Bruins will build off last week’s breakout win behind Hundley and the play of the D.
Prediction: UCLA 33 … Utah 21 Line: UCLA -13 o/u: 60 Must Watch Factor: 5: Gone Girl – 1: Mulaney … 2.5

Let’s take a look at the Conference of Champions. 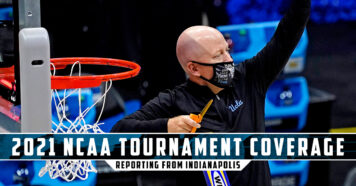 The Bruins have found their coach.