The “analytics vs. eye test” debate is a constant topic of conversation in the NBA. What’s more important: what the numbers tell you about a player, or what you see from him physically on the court?

Through just 12 games last season, Smith’s shooting percentages were up despite his point production staying the same. By raw numbers and the eye test, he was a more efficient player. However, the advanced data said something different. Despite being more efficient, the Mavericks were better at the time with Smith Jr. on the bench. His production in wins was worse than in losses. Dallas’ lineups featuring Smith Jr. struggled to produce positive point differentials.

The end goal for every team is to win. Individual players can elevate the group around them, but how a team performs in different statistical categories often determines its level of success. In the nine statistical categories we evaluated for this analysis, the Bucks finished in the top 10 in eight of them. Predictably, Milwaukee had the most wins during the regular season. So which statistics most accurately and directly translate to wins?

To start, we ranked the entire league based on 2018-19 win total. The Bucks ranked 1st with 60 wins while the Knicks finished last with 17. If teams were tied for wins, like the Thunder and Celtics at 49, both received the same rank. This ranking is the baseline to translate each statistic to a win.

Then, using data from NBA.com for the 2018-19 season, we evaluated all 30 teams and ranked them based on how they stacked up relative to the league. The categories used:

[RELATED: A Closer Look at the NBA’s New Rule Changes]

There is a caveat in this exercise. Each category carries some importance. We aren’t going to say teams should stop shooting 3s or that defense doesn’t matter. Each element of the game is important for winning, as showcased by the Bucks. Success in one realm doesn’t guarantee a winning record. A team could shoot the lights out of the gym and still finish in the middle of the standings if it does poorly in other statistical areas. We’re only attempting to determine which categories are the best predictors of a winning record, not which categories a team must excel in to guarantee a winning record.

Here are the results:

With an average differential across the league of 4.17, offensive rating was the best predictor of wins among the selected categories. This is highlighted by all of the top 10 teams in offensive rating to make the playoffs in the 2018-19 season. It was the only category where every single top-10 finisher made the postseason.

There are some teams which failed despite having good offensive efficiency. The Pelicans and Wizards finished 12th and 15th, respectively, in offensive rating but ended up 22nd and 25th in wins. Others, like the Rockets and Trail Blazers, used high-powered offenses to carry lackluster defensive showings. Having an efficient offense doesn’t guarantee success, but it is most likely to translate in the standings among the nine categories.

Defensive efficiency is also critical, but not to the level of its counterpart. The average differential for defensive efficiency was 5.23, which ranked second among the nine categories for predicting wins. Seven of the teams that finished top 10 in defensive rating made the playoffs in 2018-19.

Here’s where things start getting interesting.

Field goal percentage and field goal attempts matter from a technical standpoint, but they aren’t great predictors of winning. These two categories certainly factor into offensive rating, which was the top predictor in our exercise. However, they don’t mean much on their own.

Field goal percentage carries an average differential of 6.5 and field goal attempts is at 9.6. Those numbers rank fifth and eighth, respectively, among the nine categories evaluated. Essentially, the amount of shots a team takes doesn’t necessarily matter when it comes to wins. Eight teams in the top 10 in field goal percentage made the playoffs, but only four of the top 10 teams in field goal attempts found their way to the postseason.

A team’s overall efficiency does matter, but to a lesser extent than one would think. However, the 3-point shot is a slightly different story.

The league has changed with the 3-point shot. As teams recognize its value and trend towards shooting more perimeter shots per game and season, the importance of it has increased. The Warriors built a dynasty around the 3-point shot. The Rockets, a 3-point machine, have been the closest Western conference team to dethroning them even when they added Kevin Durant.

Teams have an average differential of 5.76 for 3-point percentage rank and 7.76 for 3-point attempts. Compare those numbers relative to their field goal counterparts and you can see the impact of the 3-point shot. It doesn’t impact wins as heavily as offensive and defensive rating, but it plays a bigger factor than total shots.

There are several different approaches to the 3-point shot. The Spurs, Clippers and Pacers were the bottom three teams in the league in attempts, but were three of the top five teams in efficiency. All three ended up with the same amount of wins last season. The Bucks and Rockets, on the other hand, trended the other way. Milwaukee and Houston finished 15th and 12th in 3-point efficiency, but were the top two teams in attempts. Both finished with more wins than San Antonio, LA and Indiana.

We’re not going to say teams should be careless with the basketball, but assist/turnover ratio had an average differential of 6.73. That ranks the statistical category sixth as a win predictor, putting it behind 3-point and field goal efficiency.

Four teams are telling of how little this statistic means in regards to winning and making the postseason. The Kings and Hornets were both in the top 10 in assist/turnover ratio. The Nets and Pistons ranked 25th and 23rd, respectively. The latter two made the playoffs while Sacramento and Charlotte watched from home.

Rebounding is more important than you may think when it comes to winning games. The average differential for rebound differential last season was 5.63, placing the category third among those selected when predicting wins.

Oklahoma City was also a strong rebounding team with Russell Westbrook and Steven Adams. The Pistons also did well in this category with Andre Drummond and Blake Griffin dominating the boards. As the NBA moves towards positionless basketball and frontcourt players have to adapt to become floor spacers, rebounding still has tremendous value in winning games.

You may hear the phrase about a team “playing with pace” or a team wanting to “play fast.” That doesn’t necessarily mean a team ranks well in pace. A team succeeds in this metric by taking shots quicker, pushing the ball up the floor faster off all opponent shots and creating turnovers to get fastbreak opportunities to get more overall possessions in a game. However, this metric might not mean anything when it comes to wins.

The average differential for pace compared to wins was 10.23, by far the worst differential among the nine categories. The top four teams in pace during the regular season didn’t come close to making the playoffs. Milwaukee, ranked fifth in pace, was one of just five top-1o teams in the metric to play in the postseason.

It makes sense that pace isn’t important in relation to the other statistics. A team can generate a million possessions, but if it doesn’t use those possessions efficiently, pace doesn’t matter. Similar to assist/turnover ratio, pace is a statistic with little change across the league. The median pace in 2018-19 was 100.47. The top team in pace, Atlanta, checked in at 104.56.

[RELATED: The Bucks Use Free Agency to Prove That Last Season Wasn’t a Fluke]

When attempting to judge how good a team will be in the standings, offensive rating is key. The most successful teams in 2018-19 all had stellar offensive ratings. Defensive rating, while not as important as its offensive counterpart, can also provide a strong indication of a team’s W-L record. These all-encompassing numbers will usually dictate how a team’s season will turn out.

Efficiency matters more than attempts for both overall shots and 3-point shots. The value of a 3-point attempt is more than a regular field goal attempt and shooting a better percentage from behind the arc means more in today’s NBA.

Rebounding differential is more important than a strong assist/turnover ratio. The margin in the latter statistic might be too small to create a difference in the standings. Dominate the boards, however, and you’re more likely to see a positive impact. Pace is largely irrelevant.

But at the end of the season, these stats all contribute to the two numbers that matter most: wins and losses. 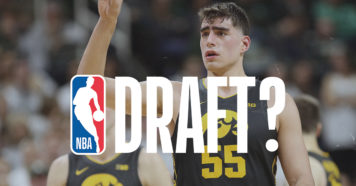 “It’s really concerning because I have no idea right now what’s going to happen with the season.”