Who Owns FireNickSaban.Com and Other Websites Dedicated to Ousting Coaches?

Alabama’s Nick Saban has a web domain dedicated to getting him fired. So does Clemson’s Dabo Swinney.

We’re obviously referring to the fire___.com websites registered by college football fans across the country that seek to overthrow prominent head coaches, who range from future Hall of Famers who have won a national championship to those who are annually on the hot seat.

The fans who have registered these URLs include former college football players, the head of a capital management firm’s investment committee, a vice president of a national association of home builders, an IT program manager, a criminal defense attorney and a high school teacher.

Stadium reached out to more than a dozen of these college football fans to find out who they are and try to answer the question of why they own a domain dedicated to firing a college football coach.

And here’s what surprised us: Rarely are the owners of these websites actually lobbying to get the coach fired.

FireNickSaban.com includes an out-of-date list of 64 teams that Saban has never defeated, which is essentially a list of every school that he had never faced at the time the list was published, allowing the site’s author to make the following tongue-in-cheek argument, which we copied and pasted below:

“But there are even more teams he’s never beaten–64 of ’em to be exact. That’s right: Nick Saban has beaten less than half of all college football teams. Where I come from, a grade of less than 50% is considered failing.”

The site’s latest blog post is titled “Even Notre Lame Played Clemson Tougher Than Saban!” and the post before that was called “Can we get Dabo… Please!”

Many fire___.com sites are parked, like FireLovieSmith.com (shown below to the right), meaning the domain has been registered, but there’s not an active website associated with it. These URLs are often registered to protect the coach from a disgruntled fan with worse intentions, or as a form of cybersquatting by someone who’s on the fence about their school’s coaching hire, registered preemptively in case the coach’s tenure goes south. 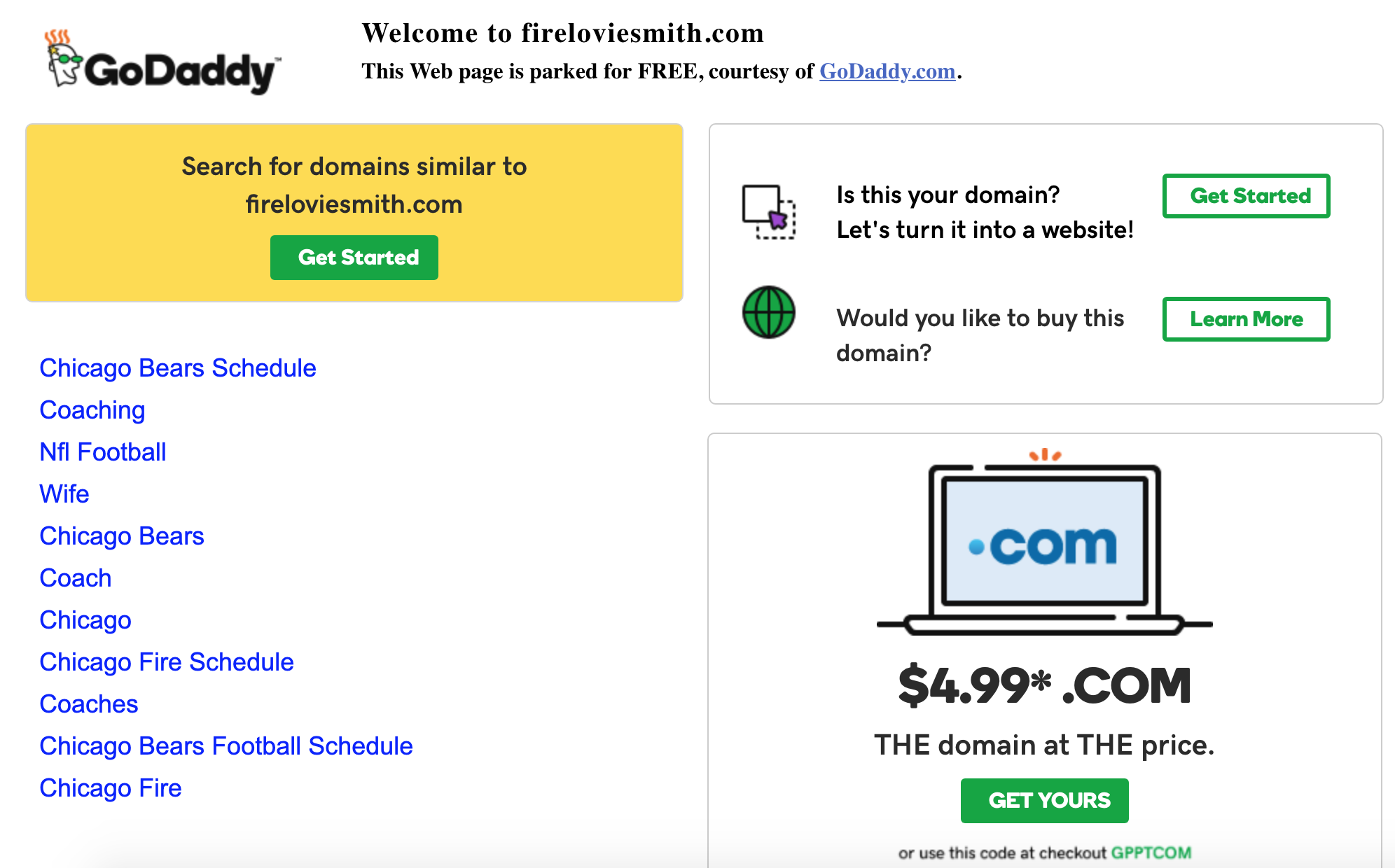 For a couple of SEC coaches, someone started squatting on their “fire” domain three years ago, building a simple website that lists a notice that the URL is for sale for the right price.

FireLovieSmith.com was registered by Jay Ramshaw, a former Illinois tight end/defensive lineman who now works for a property management and real estate company that’s based out of Champaign.

“I kind of bought it as a joke,” Ramshaw told Stadium over the phone. “I would never put up a website to defame a coach or try to fire him.”

Ramshaw played under former Illinois coach Ron Zook, who famously had a site dedicated to him called FireRonZook.com, and Ramshaw said that’s where the idea started for owning FireLovieSmith.com.

The domain was registered around lunchtime on Nov. 20, 2018 — just three days after Illinois lost at home to Iowa 63-0 to fall to 4-7 and miss out on bowl eligibility for the fourth straight season. The domain is set to expire in November 2020.

Ramshaw remembers sitting in his office one morning, irritated after Illinois Athletic Director Josh Whitman had a press conference in which he supported Smith’s job security.

Ramshaw, a Champaign resident who still has connections within the program, has met Smith a few times.

Ramshaw also looked into buying the domain “hiremikelocksley.com,” referring to Maryland coach Mike Locksley, who was Alabama’s offensive coordinator last fall. Locksley was Ramshaw’s position coach when he played at Illinois and someone Ramshaw has been “very close with.”

Ultimately, Ramshaw settled on FireLovieSmith.com, with the former Fighting Illini TE being shocked to learn that the university hadn’t already purchased the domain to protect its coach and football program.

Ramshaw’s current view of Smith as a coach is “kind of middle of the road,” so has the domain been worth the purchase?

“If you buy two years, it’s like $20. It hasn’t affected my lifestyle,” Ramshaw said, laughing, when asked if the purchase was worth it.

“It’s protecting the Illinois football name. I’ve spent money on dumber shit, I can tell you that.”

Mark Owsley, an Auburn fan and an attorney practicing in Alabama, is a self-described “domain name speculator,” having bought his first domain in 1996, when the internet was still in its infancy.

While he has bought and sold domain names over the years, that wasn’t his motivation for buying FireGusMalzahn.com, which he purchased in December 2008 after Malzahn, the former Tulsa assistant head coach/co-offensive coordinator/quarterbacks coach, was hired by former Auburn  coach Gene Chizik to be the Tigers’ OC.

“As a matter of fact, Malzahn had a history with Arkansas, at least that’s when he came into my consciousness and most of the folks in the SEC became aware of him,” Owsley told Stadium over the phone. “I remember that he came with (former Arkansas coach Houston) Nutt with a team to Auburn and they just ran all over us all day long.

“I didn’t like Malzahn… I thought that he was not going to work out at Auburn and it would not be long before we would need to try to get rid of him as offensive coordinator. I went into it not liking him. I’ve grown to like him somewhat as a person, but particularly I like his offensive philosophy — which, if he’s true to himself, is just ‘pedal to the metal, don’t ever let up’ and sort of reminds me of the old days of Steve Spurrier back in the ’90s at Florida.”

Owsley has held onto the domain ever since Malzahn was first hired by Auburn after the 2008 season, even maintaining the domain in 2012 when Malzahn left Auburn to be the head coach at Arkansas State for a season before returning to the Tigers.

Over the last three years, Owsley has had a few “joking inquiries,” where someone who’s half-serious has reached out about buying the domain from him.

But the site remains parked in his possession. However, that doesn’t mean he wouldn’t turn it into a live website if No. 10 Auburn’s season goes south — even after its Week 1 win over Oregon.

“But would I ever do it?” Owsley asked rhetorically.

“Yeah. If he completely fumbled the job this year, I’d do it. But again, losing in and of itself is not what I’d be looking at. How did they perform?”

Travis Marsh, a high school teacher and offensive coordinator in Texas, owns FireMattRhule.com, but as a fifth-generation Baylor alum, he’s a supporter of the Bears.

“I downloaded the GoDaddy app in the middle of the game,” Marsh told Stadium. “We looked terrible, we looked lost. The message boards were on fire.”

The conversations on the message boards — Marsh forgets which site he was on at the time, but he thinks it was either SicEmSports or SicEm365 — got bad enough that he stopped reading them.

The Baylor alum wasn’t surprised that no one had claimed FireMattRhule.com before him “because of the state that the Baylor program was in.” Things had gotten so bad at the end of Art Briles’ tenure, Bears fans weren’t itching to make another move. Marsh acquired the domain to protect the program.

“My plan is to hold onto it until he leaves Baylor for the NFL,” Marsh revealed. “I think he’s going to [go to the NFL]. He does such good things with their schemes, the installs.”

Similar to Marsh’s registration of FireMattRhule.com, Shanon Holm, a South Florida alum who’s a current ticket holder for the school’s football and men’s basketball programs, went to GoDaddy.com and purchased FireCharlieStrong.com after a bad loss for the Bulls last season.

“Not sure which game it was,” Holm emailed to Stadium when asked about the inspiration for the purchase.

“I had a site up for a while and took it down,” Holm said. “At the moment I am hoping for the best with Coach Strong. I decided to go ahead and take the site down. I believe we need to win at least eight games this year or the University should look into moving on.”

In an ironic troll job, FireDaveDoeren.com redirects to gopack.com, NC State’s official website for athletics, while FireMarioCristobal.com and FireChrisPetersen.com have similar redirections.

In a different kind of troll job, FireHermEdwards.com redirects to rival Arizona’s football page on the Wildcats’ athletics website.

FireMannyDiaz.com was also registered by a rival fan, just days after the Hurricanes hired Diaz.

Dave Frederick wouldn’t specify which of Miami’s rivals he’s a fan of, but he holds no ill will towards Diaz.

“I’m actually a fan of Manny Diaz,” Frederick told Stadium over the phone. “I think he’ll do a great job there. I don’t think the market for this particular domain will be very good because I can’t see anybody wanting to fire him anytime soon.”

“It’s not like ‘Fire Willie Taggart,’ that one might be hot right now, right?” he asked rhetorically, laughing.

For the record, FireWillieTaggart.com is taken, and it redirects to Tomahawk Nation, Florida State’s SB Nation affiliate, so if searches for that domain are hot, that just means more views for the fan site.

Frederick bought the domain with his dad and nephew — who are big Miami fans — in mind, before realizing that he wasn’t quite sure what he wanted to do with the website.

“I looked for our coach because I wanted to protect him and that was not available,” remarked Frederick, “so I said, ‘Let me see if Manny Diaz is available.’ It was, so I purchased it, and I could either give it to my nephew or I could have some fun with it on my own.”

Frederick is an IT program manager, so he admittedly does “have the capability to get something on there if I ever choose to do so.”

That seems unlikely, given Frederick’s respect for Diaz and how bullish he is on the coaching hire made by one of his rivals.

But other sites are much more malicious, like FireScottFrost.com, which features a crudely Photoshopped picture of the Nebraska coach inserted into a “Game of Thrones” meme.

Here are some other notable observations from our research into domains dedicated to firing coaches.

Many cunning registrants have enlisted the help of domain privacy sites that allow them to troll an FBS head coach without putting their name to it. It’s almost like the domain registration equivalent of registering a burner account on Twitter, then keeping the standard “egg” avatar and not including even a hint of personal information in your Twitter handle, Twitter name or bio.

And we won’t stop until we track them all down – including you, person who owns FireChrisAsh.com.

MORE: This Is How Much It Costs to Land One of College Football’s Top Recruiting Classes