Who’s the Most Entertaining College Basketball Coach on the Sideline? 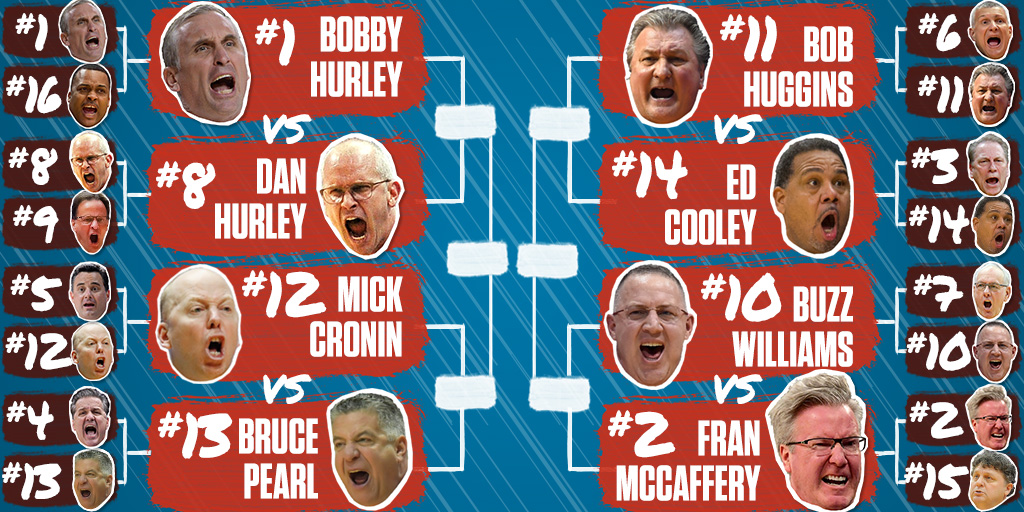 We’re going to unveil the first-ever Jimmy Patsos Award, which will be given to the most entertaining coach on the sideline. Remember, Patsos is the former Siena coach who will forever live in infamy for his invisible handshake after a game in 2017.

“He was a rare breed,” one D-1 referee told me of Patsos. “The handshake thing he did is an all-time classic.”

“He’s uncensored, unfiltered,” added another. “If I had to create someone I had to interact with for two hours, he’d be a lot like Jimmy. I feel like after I throw him out, I’d like to have a beer with him.”

The Jimmy Patsos Award winner will be decided by you. We put together a 16-person bracket and you can vote, matchup-by-matchup, to decide which coach is the most entertaining in college hoops.

You can vote by visiting my Twitter handle to make your pick for each poll.

Here are the contestants for the first-ever Jimmy Patsos Award, ranked by seed.

1) Bobby Hurley, Arizona State
He’s fiery, energetic and intense. There’s the foot-stomp, the facial expressions and the arms folded behind his back when arguing with a ref. He’s extremely animated and it often it looks like a show, but one thing Hurley is not and that’s fake.

Official Comment From a Current Referee
“If he doesn’t get his way, he’s going to make sure you know it. He’s entertaining, but there’s a lot of times when he looks like a child out there.”

2) Fran McCaffery, Iowa
He can go from 0 to 10 faster than just about anyone in the country. He’ll be mellow and then all of the sudden, his face is bright red and he’s smashing a clipboard. McCaffery has definitely earned his way onto the list.

Official Comment From a Current Referee
“Red-faced Fran. He’ll be fine … then he snaps. His face gets red as a beat. He’s actually evolved big-time with officials and gotten a lot better. He doesn’t lose his mind nearly as much now. It seems like he’s always in a battle of exploding and trying not to explode at the same time.”

3) Tom Izzo, Michigan State
He’s a fiery Italian who wears his emotions on his sleeve. He’s been known to go after a ref, a player who isn’t giving effort or even an assistant coach. But he’s just as likely to give one of his players a hug. Izzo’s facial expressions are priceless.

Official Comment From a Current Referee
“He can give it out and take it, too. The camera loves him. He’s different at home than he is on the road. He’s so smart, he gets the crowd going and they play off him. He’s a man’s man.”

4) John Calipari, Kentucky
Extremely animated, demonstrative and loves to push the limits with the coaches box. His facial expressions can be priceless – as are his gyrations.

Official Comment From a Current Referee
“He wants to be seen. He loves the attention and feeds off it. He likes doing things that draw attention to himself. It’s all about him.”

5) Sean Miller, Arizona
Miller is incredibly intense, often appearing as though his eyes are bulging out of his head. But the most entertaining aspect might be the sweat factor – Miller is rivaled only by Buzz Williams in that department.

Official Comment From a Current Referee
“Refs either love him or hate him. I like him. I’ll admit, when I’m working one of his games, I’m looking to see his armpits and how sweaty he is. It’s nasty.”

Sean Miller's first half has been WET and WILD. https://t.co/nFW8rREXEf

6) Frank Martin, South Carolina
It begins with “The Stare,” but it’s more than just the menacing look. Martin is intense – in a passionate way. He’ll get his on his players, holding them accountable — but he’s also the first one to praise them.

Official Comment From a Current Referee
“He’s extremely intense with his kids, but he doesn’t really go after us much at all. He’s very calculating when he does go after us.” 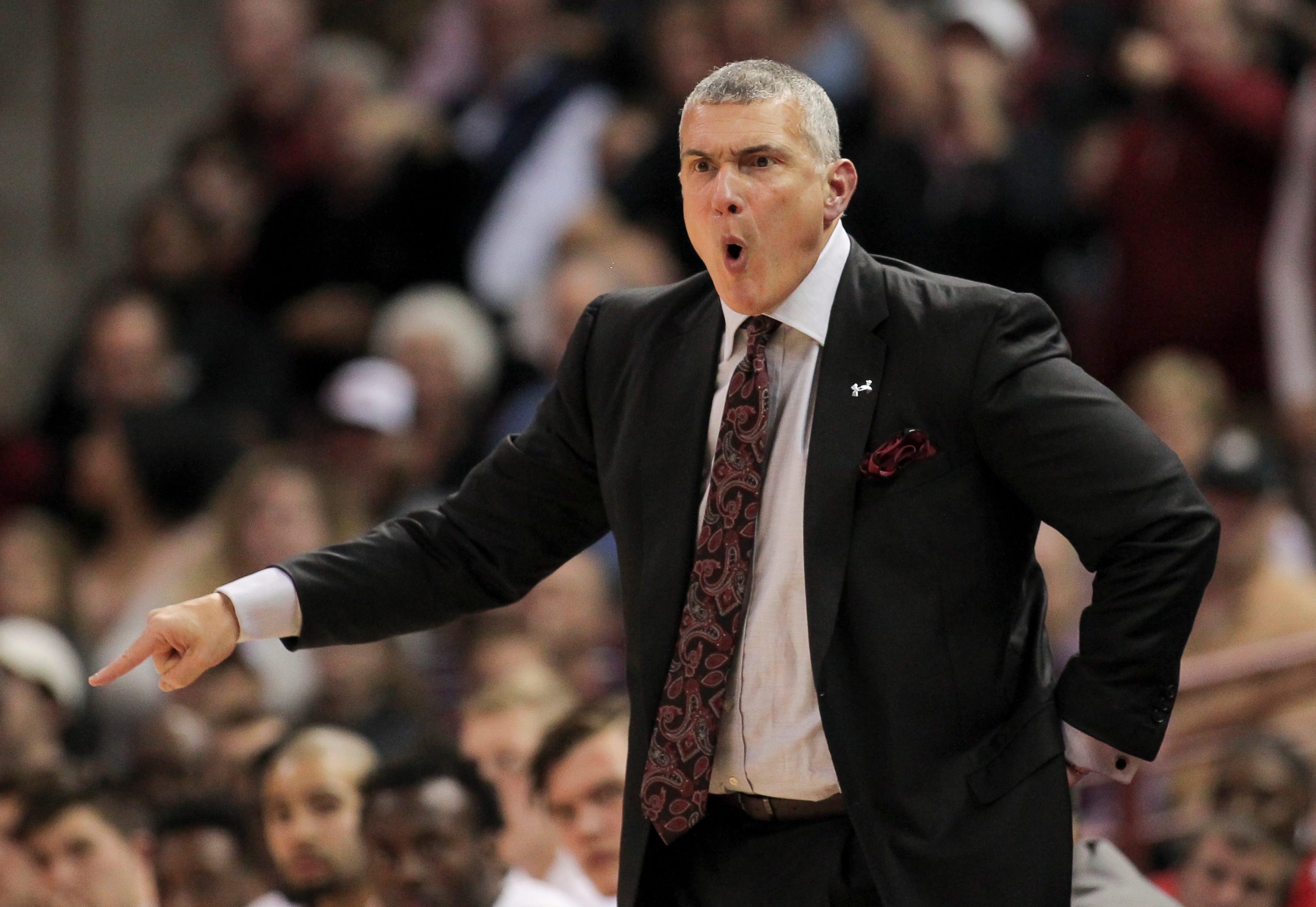 7) Jim Boeheim, Syracuse
The whining facial expressions, the jacket wrestle against Duke – and the hand gestures. Boeheim has been one of the more entertaining guys in the country for a long time.

Official Comment From a Current Referee
“He’s always got his arms out, and he’ll say something and then he just moves on. When officials talk to him, he actually listens. I love the high-pitched voice. He’s kind of a cartoon character.”

8) Dan Hurley, UConn
Dan Hurley is super-animated and intense, much like his brother, Bobby. He doesn’t go quite as hard at the refs as his brother, but there’s similar energy and some of the same types of demonstrative facial expressions.

Official Comment From a Current Referee
“Some call officiating him babysitting, but I’d call it conflict resolution. You have to anticipate an explosion. It’s a lot like a fuse. You’ve got to cut it off or it’s gonna blow up.”

Dan Hurley is the KING of sideline freak outs. What theatrics! pic.twitter.com/IEJm6eB3FG

9) Tom Crean, Georgia
No one gets more steps in during a two-hour game than Crean, who paces the sidelines incessantly. It’s the non-stop walking combined with the constant pulling up of his pants that makes for quality entertainment.

Official Comment From a Current Referee
“He gets caught up watching the other coach and what he’s doing. He’s always peeking down there. Always. He paces, but he’s good to work with because he doesn’t bitch. He makes a lot of money. Go get your pants tailored so you don’t have to keep pulling them up.”

10) Buzz Williams, Virginia Tech
He’s unique, that’s for sure. There’s the passion, the focus and often Williams looking as though he’s one of the Hokies defenders. He’s also commonly found having light-hearted conversations with the officials. And then there’s the sweat factor, which usually leads to Williams changing shirts at halftime.

Official Comment From a Current Referee
“He’s a different cat. He’s sweating, playing defense and slipping and sliding on the sideline. He’s funny to watch and he’s got no filter. After every interaction, it ends with a smile.”

11) Bob Huggins, West Virginia
There’s the pullover, or whatever you want to call it, sometimes even accompanied by a credential around his neck to identify him. Huggs has definitely mellowed, but he’ll still get up off his stool and get after his players in his own unique way.

Official Comment From a Current Referee
“He’s softened noticeably, but there’s not a guy who can control the crowd better than him. There are times when you expect him to lose his mind, but he refuses to do it and he just sits there and stares. He’s the ultimate man’s man. He’ll come at you, but you need to handle him with strength. He’ll try and bully you and you can’t allow him to do it.”

12) Mick Cronin, Cincinnati
It’s about the facial expressions for the most part, especially when Cronin is heated. He is capable of exploding at just about any time. Often times, it looks as though steam is coming out of his ears.

Official Comment From a Current Referee
“Refs have to be careful in terms of what they say to him and how they say it. I always have one eye on him. He has no problem showing up officials.”

13) Bruce Pearl, Auburn
His mouth is constantly moving – whether it’s at his players, the officials or his assistants. Pearl is also almost always out of the coaches box, he’s sweating profusely and he’s as animated as just about any coach in the nation.

Official Comment From a Current Referee
“He’s a little bit like Izzo. He knows when the cameras are on him and he’s in complete control of his actions. He knows what buttons to push, and can go from 100 to 5 miles per hour on a dime.”

14) Ed Cooley, Providence
He has an ongoing conversation with refs, the assistants and the crowd, and reacts to all three. He will talk back to fans, and almost always in a good manner – with humor. He likes the interaction, and enjoys talking to anyone and everyone.

Official Comment From a Current Referee
“I love him. He’s the best. He’s the perfect combination of humor and criticism. He knows how to let things go and move on. He’s the best.”

15) Greg Kampe, Oakland
Kampe has an uncanny ability to get his message through to his players and officials in an extroverted way. His animation on the sideline is entertaining and his delivery is often harmless, but very effective.

Official Comment From a Current Referee
“He’s a big teddy bear. He’s intense and tries to intimidate officials, and he’s good at it. He’s a trust guy. If he trusts you, you can talk to him. If he doesn’t, it doesn’t matter if you are right or wrong.”

16) Ron Hunter, Georgia State
It’s like he’s actively involved in the game – especially on the defensive end. Non-stop motion – whether it’s chest-bumping a player, talking to the refs, playing defense when the ball’s in his area. He probably gets in 4-5 miles of activity each game.

Official Comment From a Current Referee
“He’s almost like a cartoon character. Ninety-five percent of his actions are directed at his players, and not the officials. He’s so entertaining – even for us.”