The American Athletic Conference voted unanimously Friday to add Wichita State as its 12th basketball member for the 2017-18 season, marking the end of the Shockers’ long run in the Missouri Valley.

Coach Gregg Marshall has helped transform the Wichita State basketball program from a so-so mid-major into a legitimate national contender over the last six seasons. That success made the school believe it has outgrown the Missouri Valley Conference.

The American Athletic Conference agreed, unanimously approving to add the Shockers as its 12th basketball member beginning in the 2017-18 season. Wichita State will move all of its non-football sports to the AAC.

Multiple outlets reported the news Friday morning, with an official announcement from the AAC expected later in the day.

But Wichita State despite a 30-4 record on the eve of the NCAA Tournament received only a No. 10 seed and was considered to be on the bubble to even be invited as an at-large team if it hadn’t won the MVC tournament. Illinois State, which shared the conference’s regular-season title with the Shockers, was left out of the Tournament altogether.

The NCAA Tournament committee cited the quality of the MVC as a whole being weak, something that prompted Wichita State to seek options elsewhere outside of the MVC. The AAC always was the most likely destination, and it became official Friday.

Wichita State joins a conference that sent Cincinnati and SMU to the NCAA Tournament last season and also includes tradition-rich UConn, which won the 2014 national championship as a member of the AAC. 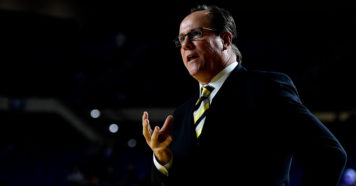 Wichita State and head coach Gregg Marshall are expected to part ways by the end of the week, multiple sources told Stadium.