Will Michigan Be the Next College Basketball Program to Hire a Famous Alum?

Last week, former Duke point guard and current ESPN analyst Jay Williams stoked the flames of a surprising fire that ignited earlier in the college basketball offseason when former Michigan Coach John Beilein became the head coach of the Cleveland Cavaliers, leaving a coaching vacancy in Ann Arbor for a job that arguably ranks among the top 20 in the country.

Juwan Howard needs to be the next head coach at @umichbball … bring back the culture of that program. @espn

“Juwan Howard needs to be the next head coach at (Michigan),” Williams tweeted about the former Michigan All-American who was a headliner on the Fab Five and has spent the last six seasons as an assistant with the Miami Heat after a 19-year NBA career.

“[It would] bring back the culture of that program.”

And how does Williams, the former national champion and national college player of the year, define “culture”?

I love how people interpret “culture” when I say it… 😂😂😂 “culture” is a look, a feel, the feeling those Fab 5 teams had… @JalenRose knows what I am talking about. Yes, they have been winning but you can’t tell me it’s been the same FEEL.

If you analyze the last 20 years of Michigan basketball, it’s hard to complain about the culture and the hard-to-define-but-you-know-it-when-you-see-it “look” and “feel” of the program under Beilein when you acknowledge what he inherited.

He took over a program that hadn’t made the NCAA Tournament in the previous nine seasons and had a 145-135 record (58-86 Big Ten) during that span under two different head coaches.

In Beilein’s 12 seasons in Ann Arbor, he led the Wolverines to nine NCAA Tournament appearances, including national runner-up finishes in 2013 and 2018, along with two Big Ten regular season and two conference tournament titles. 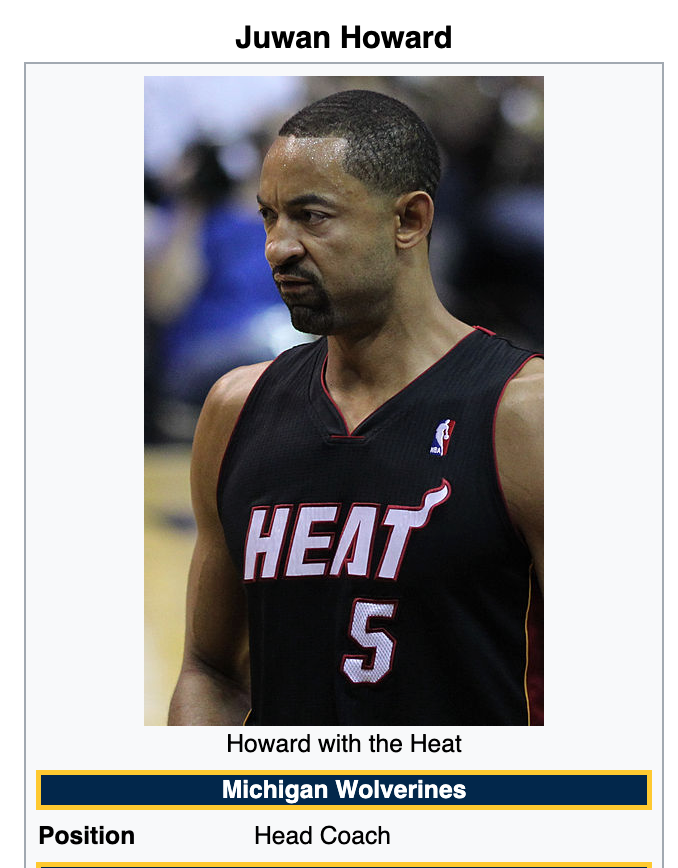 Stadium Basketball Insider Jeff Goodman reported Monday that Howard was one of three coaches who had emerged as serious candidates for the job, along with Michigan assistant coach Luke Yaklich, who was the mastermind behind the Wolverines’ defensive revival during the last two seasons, and Providence Coach Ed Cooley.

Howard’s Wikipedia page briefly listed him as the Wolverines’ head coach on Tuesday afternoon before any official announcement of a job offer or acceptance, and there was no shortage of Michigan fans rejoicing online when it was announced earlier in the day that Cooley signed an extension to stay at Providence after reportedly meeting with Michigan Athletic Director Warde Manuel.

Michigan fans, and perhaps the school’s brass, seem dead set on hiring one of their own, an All-American who averaged 20 and nine as a junior in 1994 and helped the Wolverines reach back-to-back national championship games in the previous two seasons. Even LeBron James and Dwyane Wade are fans of the potential hire.

Maybe Cooley, who has a 1-5 record in the NCAA Tournament and just one regular season conference title in 13 years as a Division I head coach (stats the Michigan fan in your life has surely rattled off in the last 24 hours), wasn’t the perfect fit to replace Beilein.

But he has still turned Providence into a consistent NCAA Tournament participant and 20-game winner despite it being one of the four worst jobs in the Big East, according to the conference’s coaches.

Howard is an unknown, which fuels both the excitement among Michigan fans and perhaps some hesitancy by those who aren’t wearing maize and blue.

That’s not to say Cooley would’ve been a home run hire and that Howard would be a flop, but there’s enough recent evidence showing that hiring a big-name coach (especially one who’s a prestigious alum), who has spent most of his professional career in the NBA ranks, to be a first-time college basketball head coach can be a risky decision.

At the very least, the class of coaches with this type of cachet have a higher winning percentage in their introductory press conferences than they do on the court.

We’re talking about former St. John’s Coach Chris Mullin, who stepped down this offseason after compiling a 59-73 record in four seasons with the Red Storm, and former Rutgers Coach Eddie Jordan, who was fired in 2016 after a sub-.300 winning percentage in three seasons.

Patrick Ewing is 34-29 through his first two years at Georgetown as he still searches for his first NCAA Tournament appearance at his alma mater.

Former UConn Coach Kevin Ollie, who did spend two years as an assistant at the school before being promoted to head coach, was fired just four seasons after winning a national championship (the school said the reason was for NCAA violations regarding improper workouts and contact with recruits, allowing the university to fire him without pay, but it’s hard not to be skeptical that his 30-35 record in his last two seasons didn’t play a role in the decision).

If Howard is the choice for Michigan, the hope for the Wolverines is that he can be a hybrid of Fred Hoiberg and Penny Hardaway.

We’ll explain what that means.

Hoiberg, known as “The Mayor” in Ames, had his jersey retired as a player at Iowa State, and he returned in 2010 to be the Cyclones’ head coach after spending time working in the Minnesota Timberwolves’ front office.

He led Iowa State to the NCAA Tournament four times during his five seasons in charge, and the Cyclones won the Big 12 Tournament in 2014 and 2015.

Michigan has made the NCAA Tournament in each of the last four seasons and eight of the last nine, so anything less than having its named called annually on Selection Sunday will be a disappointment for the Wolverines and their fans.

Much of the allure that Jay Williams described in Michigan hiring Howard was about the “look” and “feel” of the Fab Five teams that Howard played on in the ’90s, which notably featured a stretch in 1992 when all five freshmen started. The Wolverines enrolled four top-10 recruits in 1991 – Howard, Chris Webber, Jalen Rose and Jimmy King – but that hasn’t been the recruiting neighborhood that they lived in under Beilein.

Glenn Robinson III was the only five-star recruit that enrolled at Michigan during Beilein’s tenure, according to the 247Sports Composite rankings. But that didn’t stop the Wolverines from winning basketball games.

Once Beilein got Michigan rolling, he seemingly had a player or two make a huge leap in their development every season. Here are several examples:

That’s exactly why Howard needs to be a mix of Hoiberg and Hardaway – a coach who racks up wins early on the court and on the recruiting trail, with the latter ideally leading to the former. Hardaway, whose Memphis team went 22-14 in Year One, currently has the No. 1 recruiting class in the country for 2019, headlined by five-star recruits James Wiseman and Precious Achiuwa.

It’s also worth mentioning Hardaway was previously a high school and AAU coach with valuable connections on the recruiting trail.

Keeping that in mind, a big win or two on the recruiting trail doesn’t always lead to long-term success.

We’ve examined the impact of a top-10 recruit committing to a school that rarely lands prospects of that caliber and the “average” season is underwhelming – roughly 23 wins and a tournament appearance.

College basketball head coaching hires with strong NBA ties have been just as hit-or-miss – skewing towards the latter – at schools that aren’t the coach’s alma mater.

Alabama and Avery Johnson parted ways this offseason after one NCAA Tournament appearance and a 75-62 record in four seasons.

Terry Porter, the former Milwaukee Bucks and Phoenix Suns head coach who had a 17-year playing career in the NBA, is 28-69 in three years at Portland.

Damon Stoudamire, who played in the NBA for 13 years and later spent two years as an assistant with the Memphis Grizzlies, is 39-58 in three seasons at Pacific.

As for this offseason, we saw Vanderbilt hire Jerry Stackhouse, an 18-year NBA veteran who was previously an assistant coach for the Toronto Raptors and Memphis Grizzlies as well as the head coach of the Raptors’ G League team, and Temple elevate alum Aaron McKie, a 13-year NBA veteran who spent time as a Philadelphia 76ers assistant and the last five seasons as a Temple assistant.

So if he’s hired by Michigan, Howard wouldn’t be alone during this coaching cycle as a first-time college head coach who has decades of experience in the NBA. It wouldn’t be a flawed coaching search or hiring process for Michigan to settle on Howard as Beilein’s replacement, as long as it’s for his coaching acumen, faith in his ability to recruit and his capacity to handle everything that comes with running a high-major program.

But if Michigan’s power brokers end up chasing the ghosts of the Fab Five era by pursuing Howard, reminiscing on 1991 rather than planning ahead for 2021 and beyond, his potential tenure in Ann Arbor could follow those lackluster coaching records compiled by his peers who jumped from the NBA to college.