Will There Be College Football in 2020? Athletic Directors Weigh In

Nearly one-fifth of Football Bowl Subdivision (FBS) athletic directors believe there is at least a 50 percent chance a full college football season won’t be played this fall because of the impact of COVID-19.

And if there is no college football, a majority of the 130 FBS athletic directors contacted by Stadium predict dire consequences for the sport.

“There better be (a season) or many programs will be out of business,” an athletic director said.

“Quite simply,” added another AD, “it would be devastating.” 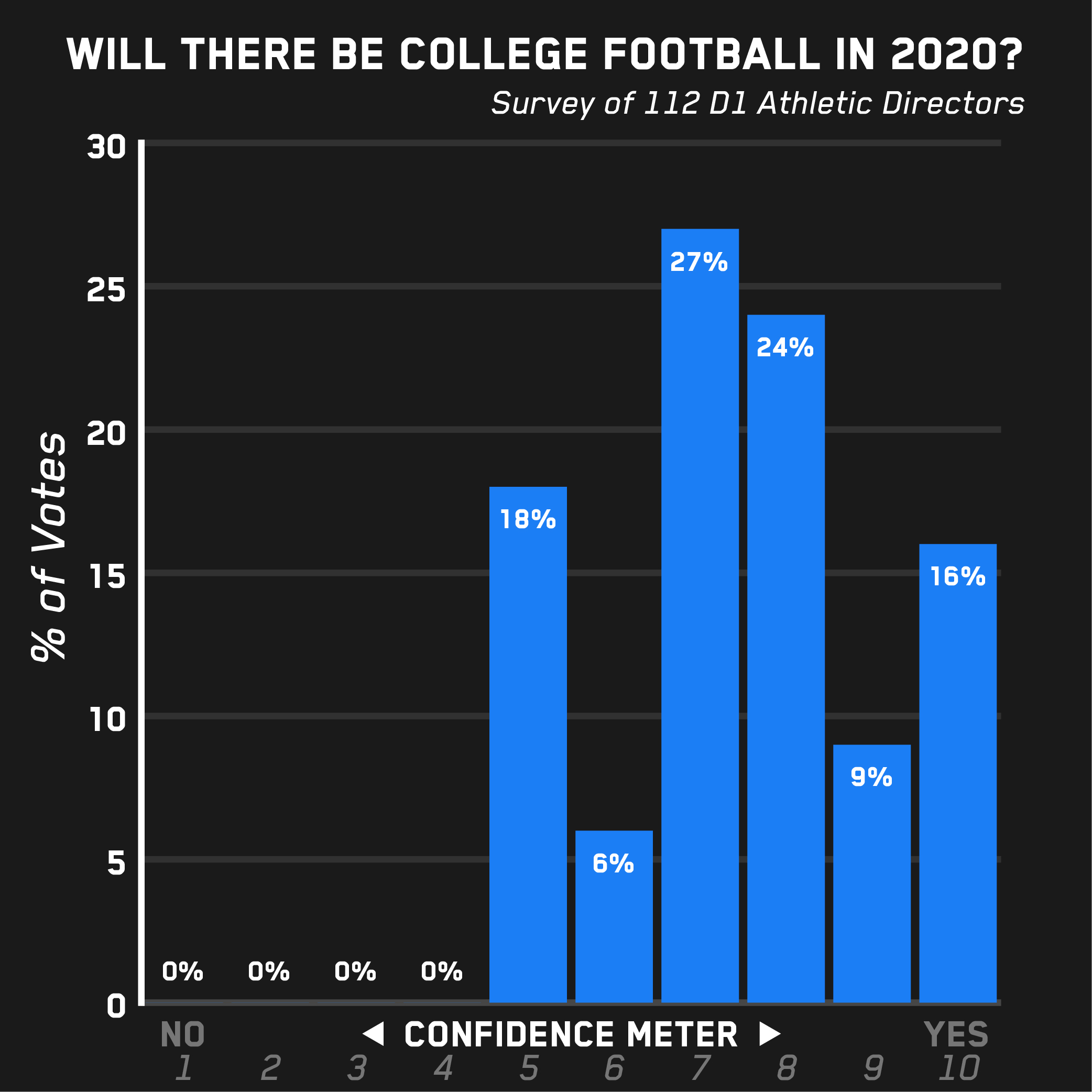 Without the millions of dollars of revenue generated by college football programs (media rights, ticket sales, sponsorships, donations, etc.), some ADs fear there would be incredible consequences, including schools having to cut or eliminate Olympic/non-revenue sports.

In a survey conducted by Stadium, all 130 FBS athletic directors were asked to rank their optimism on the upcoming season being played from “1” (will not be played) to “10” (definitely will be played). Of the 130 ADs contacted during the past week, 112 participated in the anonymous survey.

None of the ADs gave lower than a “5” ranking (meaning a 50/50 chance there is no season). However, several admitted they probably provided a higher-numbered response because they wanted to remain positive and optimistic about having the season.

“I’m optimistic we’ll have a season,” a Power Five AD said. “But, ask me again in May what I think.”

The athletic directors lamented the uncertainty of not knowing when the COVID-19 situation would allow for life — and collegiate athletics — to return to normal. Until that happens, no one knows how that would impact the upcoming season.

If there is a season. 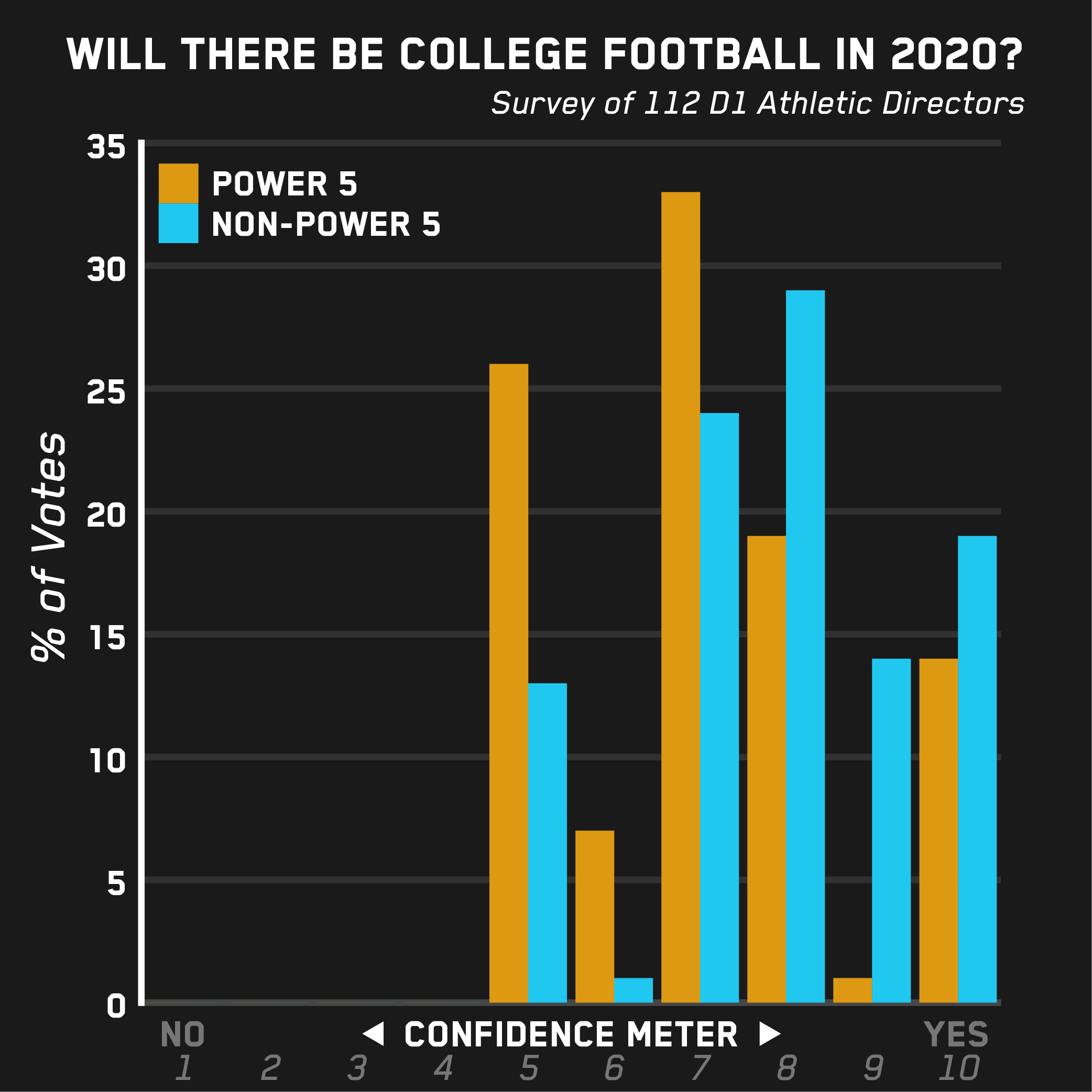 Last week, Big 12 commissioner Bob Bowlsby said on a conference call the next 60 to 90 days would determine if there was a football season and admitted “the fall is in jeopardy.”

If there is no season, Bowlsby said, “It’s a whole new ballgame. It affects everything we do. It affects the largest portion of our TV contract. If that doesn’t happen, the underpinning of what we know as normal goes away, and we’ll have some major changes to make.”

“There is still so much to be assessed over the next several months,” the AD said. “Concerns with finances, adequate practice for teams, potential looming restrictions in regard to travel to certain states, TV scheduling, the uncertainty of what the stadiums will be — what will be the fans’ perspective of sitting so close to another?

Several ADs mentioned the ongoing anxiety of not knowing what will happen and when “the all-clear” will be given to return to normal.

“This has been crazy with high anxiety,” a Power Five AD said. “The potential financial impact is starting to be understood.”

Added another Power Five AD: “As of right now, I have no clue if there will be a full season. But if we don’t, it will get ugly.”

“Most of the Power Five schools wouldn’t miss a beat,” a Group of Five AD said, “but it would be devastating to the rest of us.”

Yet another predicted an even grimmer outlook: “If we’re aren’t back (playing) by the fall, it will look like the Great Depression, and we will be in soup lines.”

Coming Thursday: The college football season is scheduled to kick off on Aug. 29 with seven games involving FBS teams. What are some of the potential options athletic directors are considering if the start of the season is delayed?

MORE: This Is What College Hoops Coaches Like to Watch While Stuck at Home