Multi-team events, otherwise known as MTEs, have popped up everywhere these days. Maui Invitational and the Preseason NIT used to be loaded, but now there are so many MTEs that they are all watered down.

But it’s still fun to see teams having to leave their home arenas and play someone. It helps determine an overall league strength and can also be the difference between a team getting into the NCAA tourney or heading to the NIT.

Here are 10 winners and 10 losers from the last couple weeks in MTEs.

[RELATED: Scott Drew Was Bothered by Coaching Criticism – So He Did Something About It]

1) Juwan Howard – There were skeptics — and yes, I was one of them. But the former NBA player/assistant coach is quieting all of us with Michigan’s performance on the court. No one had a better week than the first-year Michigan head coach. There were plenty who worried whether he could coach, but he reeled off three wins down in the Bahamas against Iowa State, UNC and Gonzaga. Howard has not only quieted the non-believers, but has also put the Wolverines in a great spot entering December, and this early success should also help on the recruiting trail.

2) Florida State – The Seminoles lost on the road in the season-opener against Pittsburgh, but bounced back with a road win in Gainesville against Florida. They added two more quality wins on their resume against Tennessee and Purdue down in Florida. The ‘Noles held Purdue to 60 points and Tennessee to 57.

3) Obi Toppin – Dayton’s big man went out to Maui and averaged 22.3 points and 7.0 boards per game in leading the Flyers to wins over Georgia and Virginia Tech, and also playing until the wire with Kansas. Toppin didn’t just improve his draft stock by making 6-of-11 shots from deep, but also showed he is one of the top big men in the country. Dayton is in good shape entering December.

4) Bob Huggins – Last year was miserable for Huggs, but West Virginia is 7-0 thus far and coming off wins over UNI and Wichita State in Cancun. A year ago at this time, the Mountaineers were 5-2 and had lost to Buffalo and Western Kentucky. Freshman big man Oscar Tshiebwe was a monster against Wichita with 19 points and 18 boards.

5) Anthony Edwards – Georgia struggled in Maui, but the talented freshman guard showed why he’s in the equation for the No. 1 overall pick when he went crazy in the second half against Michigan State and finished with 37 points while shooting 7-of-16 from deep.

6) Malachi Flynn – San Diego State’s new point guard sat out last season after transferring from Washington State, and has been a game-changer for the Aztecs. He scored 28 in the win over Iowa in Las Vegas after going for 21 in the victory over Creighton. San Diego State is off to an 8-0 start, largely due to the presence of Flynn and improved chemistry.

7) Utah State – The Aggies remain without big man Neemias Queta, who is still recovering from an offseason knee injury. Sam Merrill had 24 in a come-from-behind win over LSU in Jamaica. This could be a significant win for a team that won’t get a ton of resume opportunities in the Mountain West.

8) Collin Gillespie – I called Villanova’s point guard overrated to ESPN analyst Fran Fraschilla when he called Gillespie one of the top 10 players at his position. I later apologized to Fraschilla. Gillespie had 27 points and five assists in a loss to Baylor, after going for 18 and nine in a win over Mississippi State. He’s the key to ‘Nova this season.

9) Mike White – Florida’s head coach was getting crucified for the Gators’ start, and losses to Florida State and UConn. But White & Co. went 3-0 in Charleston with a big win coming in the title game against a Xavier team known for its toughness.

10) Killian Tillie – The oft-injured Gonzaga forward didn’t play in the Zags first game in the Bahamas, but logged 27 minutes against Oregon and then played 26 the next day in a loss to Michigan in which he scored 20 points. It’s just great to see Tillie on the court healthy, and obviously Mark Few will need the skilled big man in order to make a run come March.

1) Providence – The Friars had an awful November. They lost to Northwestern on the road, Penn at home and then went west this past week and dropped games to Long Beach State and Charleston before finishing the tourney with a win over Pepperdine. Ed Cooley’s team has dug itself a huge hole that will make it much harder to get back to the NCAA tourney.

2) Texas Tech – No one thinks more highly of Chris Beard than me, but obviously we ranked this Red Raiders team too high in the preseason based on what Beard has done in Lubbock the past two years. This is another new team, and it’ll take time. Texas Tech lost to both Iowa and Creighton out in Las Vegas. In Beard We Trust, so we’ll see if he can get this group to the NCAA tourney.

3) Wisconsin – The Badgers didn’t do themselves any favors in Brooklyn this past week. It’s not as if either losses were terrible, but if Greg Gard wants to get to the NCAA tourney, losing to Richmond and New Mexico won’t help their case come March.

4) Syracuse – The Orange lost to Oklahoma State and Penn State in Brooklyn, and Jim Boeheim’s team will have work to do in order to be a team that can compete for an NCAA tourney bid. The good news is that freshman Quincy Guerrier had a double-double against Penn State, but the Orange will need better overall point guard play.

5) SEC – Florida won out in Charleston, and Auburn beat New Mexico and Richmond in Brooklyn. But Texas A&M went 0-3, South Carolina and Missouri went 0-2, Georgia’s lone win in Maui came against Chaminade and Alabama’s lone victory in the Bahamas came against Southern Miss. Take away Florida and Auburn, and the rest of the league was a combined 7-15 in MTEs.

6) Utah – It seems like an eternity ago that Larry Krystkowiak had the Utes back on the national map. They went to the Sweet 16 in 2015 and back to the tourney in ’16. The team is young, but it also doesn’t have a Delon Wright, Kyle Kuzma or Jakob Poeltl. Utah lost to Coastal Carolina and Tulane in Myrtle Beach.

7) Kansas State – Bruce Weber has taken K-State to the NCAA tourney three consecutive seasons, but it’s difficult to imagine that streak reaching four – especially after the Wildcats lost to Pitt and Bradley down in Fort Myers.

8) Texas A&M – Not a ton was expected from Buzz Williams in his first season in College Station, but no one expected the Aggies to leave Orlando without a win – especially after drawing Fairfield on the final day following losses to Harvard and Temple.

9) VCU – Listen, there’s no shame in losing to Purdue or Tennessee. But if Mike Rhoades and the Rams want to be a top 25 team, they could have used a split. Instead, they lost both games down in Florida and were out-rebounded 69-52 in the two losses.

10) USF – There were such high hopes for Brian Gregory and the Bulls, who were picked fifth in the AAC. However, they lost star Alexis Yetna for the season due to a knee injury and are now 3-4 overall after losses to New Mexico State and a lackluster Nebraska team in the Cayman Islands. 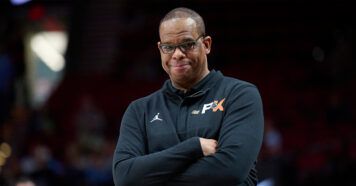