Xavier erased a 10-point deficit in the final four minutes to beat Butler 70-69 on Sunday in the best win of the Travis Steele era.

Last offseason, former Xavier Coach Chris Mack left for Louisville after nine seasons as the head coach of the Musketeers and Xavier promoted from within, elevating Steele from his previous role as associate head coach, while the Cardinals reap the benefits of Mack’s coaching.

It’s been a rocky start to the season for the defending Big East champions as they’ve already lost seven games – one more than they did all of last season when they earned the first No. 1 seed in school history. The Musketeers took a top-10 Auburn team to overtime in the Maui Invitational before losing by nine and they blew a 10-point lead in the second half at home against Seton Hall as previous potential signature wins slipped through their grasp.

But on Sunday, Xavier conquered its late-game execution woes to pick up its biggest win of the season.

The victory over rival Butler, which is ranked No. 40 in kenpom.com and No. 49 in the NET, puts Xavier in a tie for third-place in the Big East with a 3-2 conference record.

Playing without starting point guard Quentin Goodin, who was sidelined for the second game in a row due to a knee injury, and starting forward Tyrique Jones, who fouled out with 3:58 left in the game when Xavier trailed by 10, the Musketeers finished the game on a 16-5 run.

Butler’s Kamar Baldwin found teammate Sean McDermott, who made a three that gave the Bulldogs a 64-54 lead with 5:21 left in regulation. It was Butler’s fourth three-pointer in the span of seven possessions as the Bulldogs appeared on the verge of securing their first road win of the season.

Xavier had other plans.

With Jones on the bench, his frontcourt mate Zach Hankins, a grad transfer who was the DII National Player of the Year at Ferris State last season, sparked the Xavier rally.

On the Musketeers’ first possession after Jones fouled out, Hankins made a one-handed jumper in the lane as he got fouled by Butler’s Jordan Tucker and he made the free throw to complete the three-point play. 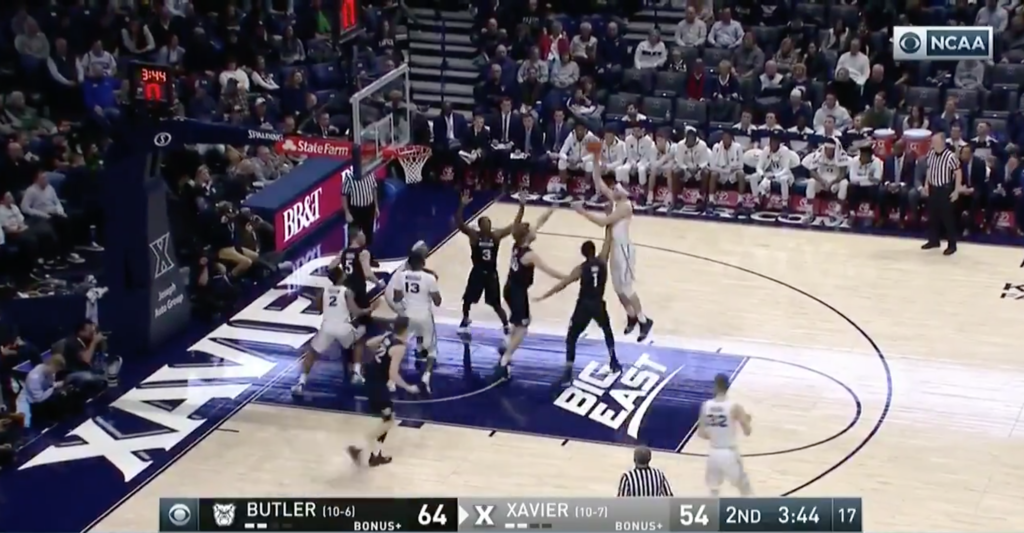 Xavier’s next trip down the floor saw Hankins establish inside position after Butler’s Joey Brunk fell to the ground and Hankins tipped in a missed three from teammate Paul Scruggs to cut Butler’s lead to five points in the span of 12 seconds. 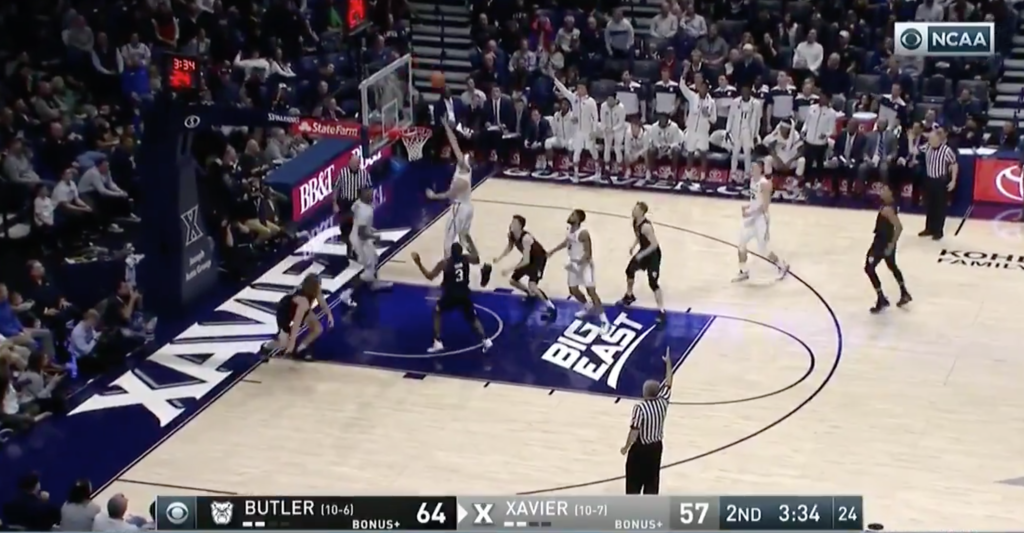 Following a turnover by Kamar Baldwin, Xavier turned defense into offense as the Musketeers swung the ball to a wide-open Paul Scruggs in the right corner. He made his fifth three of the game, setting a new career record for the sophomore, as he finished with a game-high 23 points, eight rebounds and six assists. 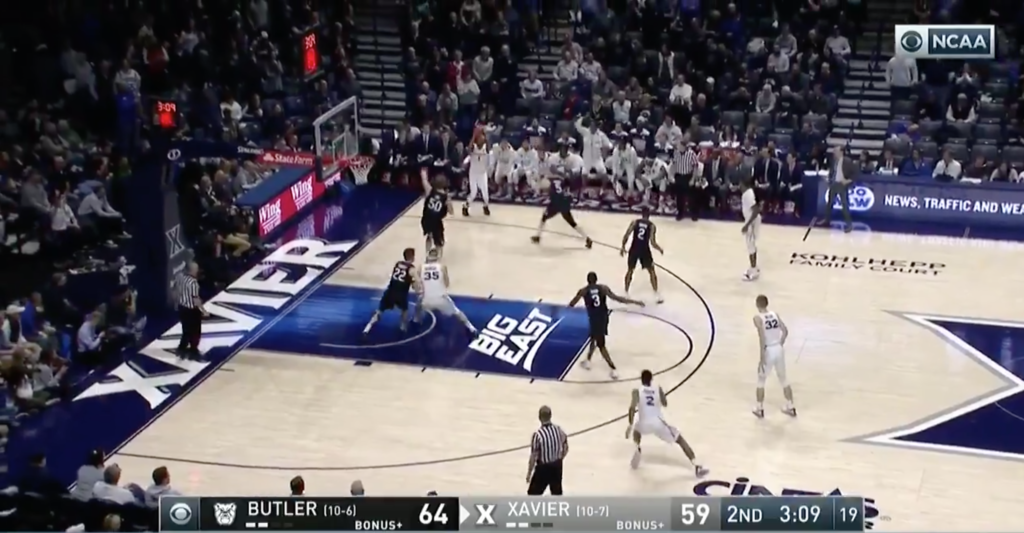 Kyle Castlin and Naji Marshall both went 2-for-2 in their respective trips to the free throw line in the next two minutes, while Butler’s Joey Brunk went 0-for-2 following a questionable foul call on Hankins that left Steele irate on the sideline.

After Marshall’s free throws tied the game at 66, Baldwin gave Butler a 69-66 lead after a three-point play.

Butler wouldn’t score again in the final 70 seconds of the game.

The Bulldogs once again failed to locate a Xavier shooter in the right corner as Scruggs fired a one-handed pass across the court off the dribble to Castlin, who made a game-typing three. 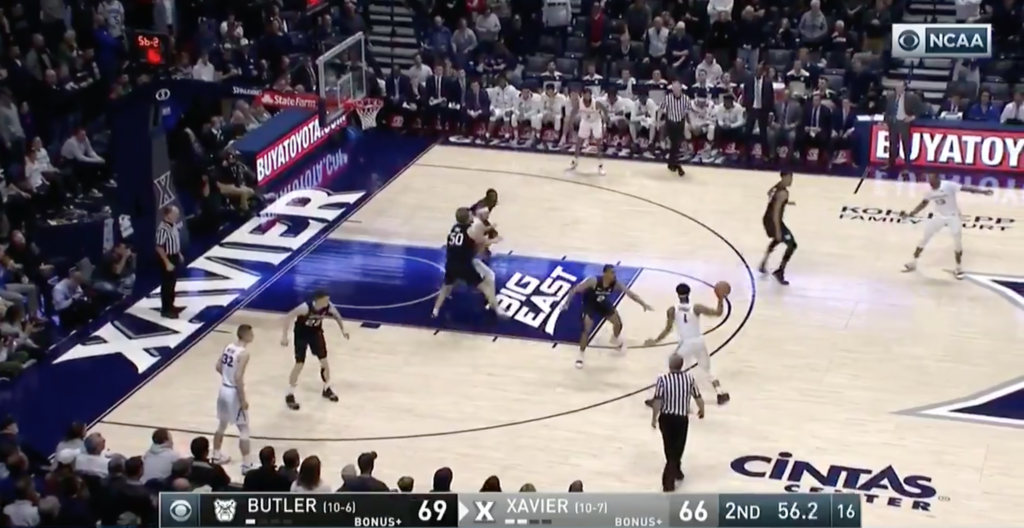 It was just Castlin’s sixth three-pointer of the season (and his first since December 5) to give him a season-high 12 points.

Jorgensen’s three-point answer on the other end was off the mark.

Xavier had the ball with 33 seconds remaining so the Musketeers could take the clock almost all the way down to zero before attempting a game-winning shot. They put the ball in the hand of Marshall with four players lined up across the baseline. Marshall drove to the rim and attempted a scoop layup, drawing a foul on Butler’s Jordan Tucker with 3.2 seconds left and one second on the shot clock.

Marshall missed his first free throw but made the second, giving Xavier a 70-69 lead.

Butler was able to get the ball in the hands of Baldwin on the last play of the game while he was running down the floor but Marshall and Scruggs were able to wall him off and for him into an off-balanced, desperation heave that fell short of the rim. 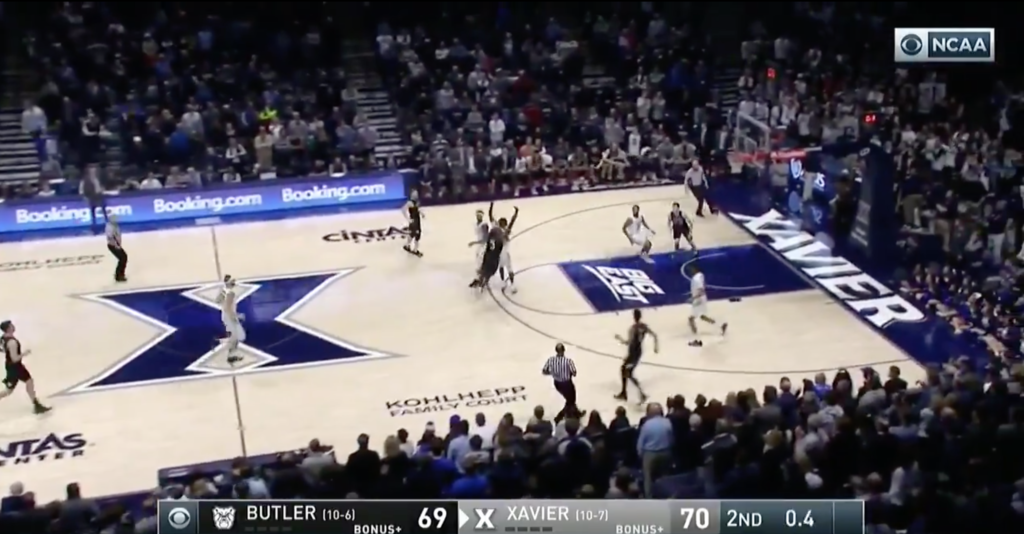 Xavier still has room to improve. The Musketeers’ rotation is extremely thin without Goodin, a veteran point guard who led them to the Elite Eight as a freshman, and their bench only contributed three points on 1-of-12 shooting on Sunday. Xavier is shooting just 31.7 percent from behind the arc this season and it beat Butler in spite of a 25 percent three-point shooting performance.

But if Xavier can erase a double-digit deficit to beat a top-50 opponent without being at full strength, then the Musketeers might possess a resiliency that allows them to contend for a top-half finish in the Big East even in a transition year in Cincinnati.