Last season, Alabama had an embarrassment of riches at its offensive skill positions, ranging from having former SEC Offensive Player of the Year Jalen Hurts as its backup quarterback to five receivers who had at least 40 receptions, 600 receiving yards, six touchdowns and an average of at least 16 yards per catch.

In its backfield, the Crimson Tide running back with the third-most rushing yards, Josh Jacobs, was seen as arguably the best pro prospect of the bunch, and he was selected 24th overall by the Oakland Raiders in the 2019 NFL Draft.

With a running back room that consisted of Jacobs, Damien Harris, Najee Harris and Brian Robinson Jr., plus mobile quarterbacks in Tua Tagovailoa and Hurts, Alabama had six trusted running threats with varying roles and skillsets.

Obviously, not every program can assemble a four-man running back rotation on par with 2018 Alabama, but data indicates that in the last six seasons, college football teams have gradually shifted towards sharing the wealth with more ball-carriers.

In an effort to quantify the roles of running backs in college football, we examined every program that finished the 2018 college football season ranked in the final AP Top 25 Poll and its rushing attack since the 2007 season.

That may seem like an arbitrary cut-off, but it’s intentional.

While Clemson has won two of the last three national championships, including last season’s 44-16 drubbing of Alabama in the National Championship Game, and proven to be the Crimson Tide’s equal, Saban’s squad has been the gold standard in college football since his return to the collegiate game.

Since the start of the 2007 season, Alabama has won five national championships and finished as the national runner-up twice, so more times than not the Crimson Tide’s season has ended in the title game since Saban took over.

The 25 teams we examined include multiple schools from every Power Five conference, plus the AAC (UCF, Cincinnati) and Mountain West (Fresno State, Utah State, Boise State), as well as independents Notre Dame and Army.

This group represents roughly 20 percent of the 130 FBS schools, ranging from one of the most run-heavy offenses (Army) to the least (Washington State).

Using data from cfbstats.com, which dates back to the 2009 season, we found that a team’s leading rusher (based on rushing yards, not attempts) has received a smaller share of his team’s carries in four of the last six seasons compared to the years prior.

While these decreases range from just three to five percent of a team’s total rushing attempts in a season compared to previous years, that could translate to 15 to 35 fewer carries for a running back in a season and potentially upwards of 100 fewer carries during a four-year career.

On average, running backs have the shortest NFL careers of any position at just 2.57 years, which is why this data is relevant all the way from how college coaches recruit high school prospects at the position to how successful college running backs fare at the next level.

The chart below shows the percentage of a team’s season-long rushing yards for which its leading rusher was responsible. Once again, we mean leading rusher in terms of yards, not carries. 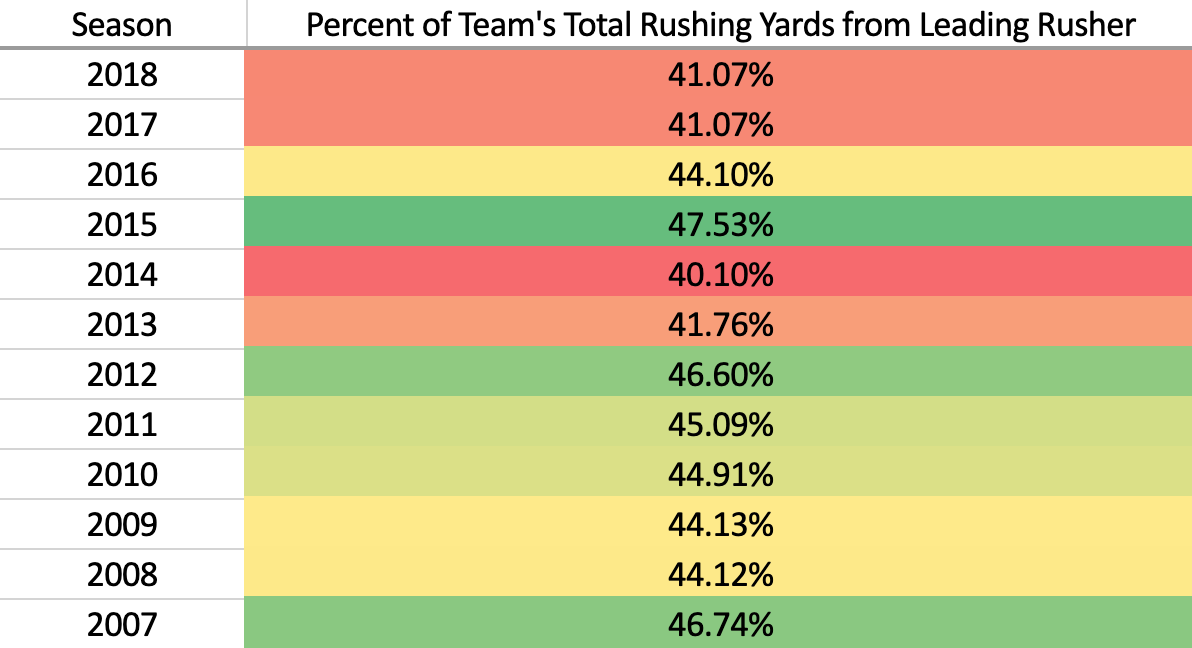 As you’ll notice, the 2015 season served as a high-water mark for the percent of carries and total rushing yards for which a school’s leading rusher was responsible. But this may have been the result of some supremely talented and durable college running backs coexisting in the sport during the same season.

Among the 2015 running backs — many of whom are now on NFL rosters — we examined:

Derrick Henry’s 395 carries during his Heisman Trophy-winning 2015 season were the second-most of any player examined for this story — second only to UCF’s Kevin Smith, who had 450 (!) carries in 2007 — and even though Alabama has had a sturdy NFL-bound lineage at running back — from Mark Ingram to Trent Richardson to Eddie Lacy to T.J. Yeldon to Henry — the Crimson Tide haven’t had another leading rusher under Saban who came within 110 carries of Henry’s total from his junior season.

In the College Football Playoff era (2014-present), Alabama’s leading rusher has had 172, 395, 146, 135 and 150 carries, respectively. The Crimson Tide have had three players run the ball at least 100 times in each of the last three seasons with former Alabama quarterback Jalen Hurts being among them in 2016 and 2017.

That formula isn’t unique to the Crimson Tide, either.

Oklahoma had three players exceed 110 carries last season, including Heisman Trophy winner Kyler Murray. And that was after running back Rodney Anderson suffered a season-ending knee injury in the Sooners’ second game of the season.

Clemson’s Travis Etienne (204 carries, 1,658 rushing yards, 24 rushing TDs) was clearly the Tigers’ featured back last season, but Tavien Feaster, Adam Choice and Lyn-J Dixon each had between 60 and 80 carries and proved effective on a yards-per-carry basis.

There’s an argument to be made that individual sacrifice — or more accurately, the recruiting and in-game coaching decisions that lead to running backs splitting carries — can pay dividends for the offense as a whole because of the benefits of running backs with fresher legs and different skillsets splitting time in the backfield. 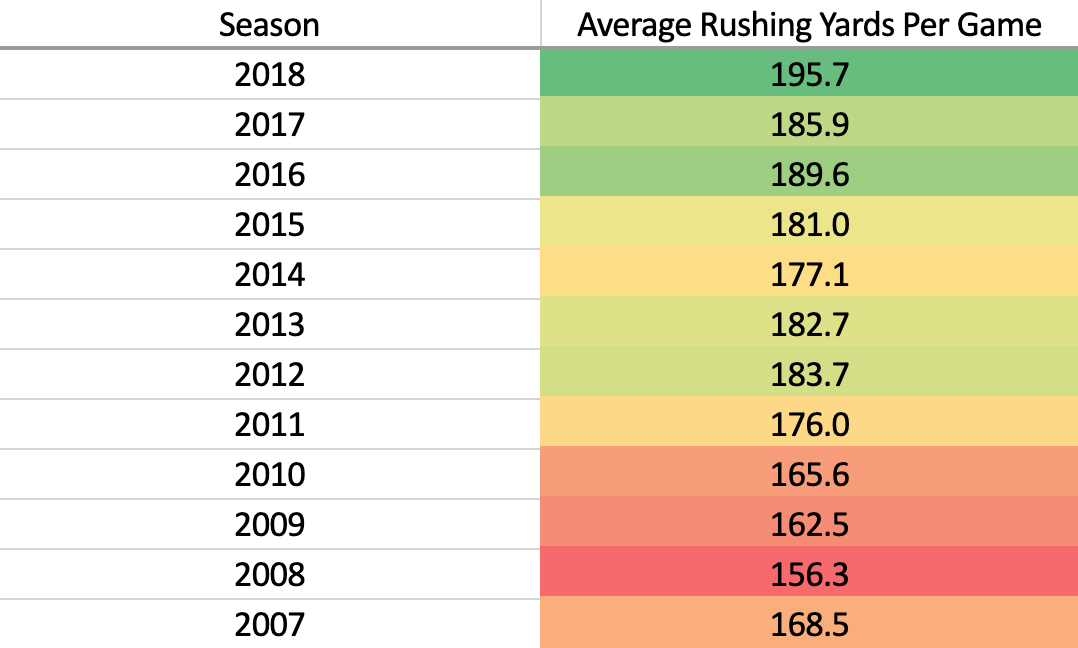 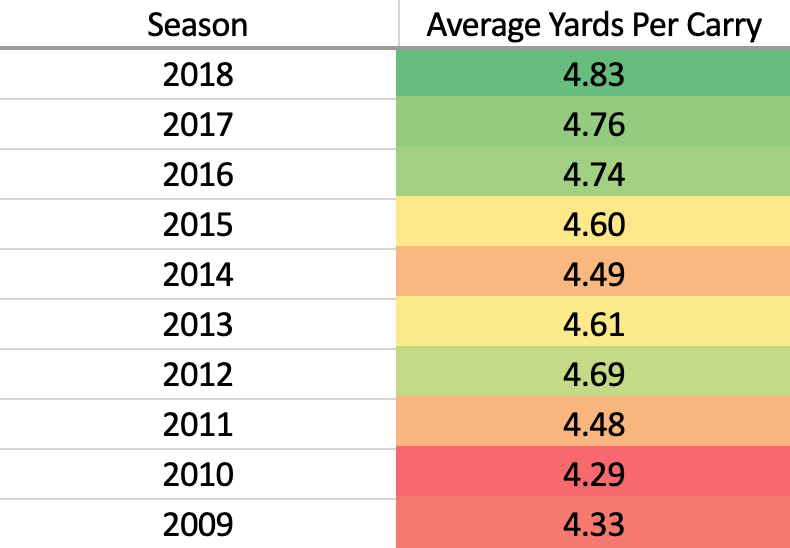 This research and data isn’t presented to say that a three-down, workhorse running back like Derrick Henry, Ezekiel Elliott, Leonard Fournette or Saquon Barkley is a bad thing.

But running backs who are capable of shouldering 250-plus carries in a season and making a run at 2,000 yards with 20 or 30-some total touchdowns don’t grow on trees.

For teams without one of those running backs, a more diverse backfield could lead to individual health and longevity at the position and more efficient rushing numbers as a team.

Or if your elite recruiting efforts can yield multiple blue-chip prospects at the position, what’s better than having one highly touted running back on your roster?

The answer from Georgia, which has had four different 1,000-yard rushers in the last two seasons, would be having multiple players of that caliber.

Alabama’s Najee Harris, the No. 1 running back in the 2017 recruiting class and the No. 2 prospect overall, according to the 247Sports Composite rankings, will be the Crimson Tide’s starter this fall after the departures of Damien Harris and Josh Jacobs.

Brian Robinson Jr. will certainly be in the mix for his fair share of carries after 63 rushes for 272 yards and two touchdowns last season. Alabama will also enroll 5-star running back Trey Sanders (No. 6 overall) and 4-star running back Keilan Robinson (No. 244 overall), who will hope to continue the success at the position like the legends before them.

That’s how you end up with a backfield like Alabama’s last season, when the running back with the third-most carries on the team averaged a team-high 6.7 yards per attempt, the running back with the second-most carries led the team’s backfield with 14 total touchdowns before getting drafted in the first round and the team’s leading rusher was coming off of back-to-back 1,000-yard seasons in the SEC.

So debates about which running back on a college football team is the best, which one deserves more carries and which combination is the best long-term are likely here to stay.

Because recent history suggests that a running-back-by-committee approach is becoming more common and teams are better for it.

Moorhead’s dismissal coincides with a late-season swoon and discipline issues that plagued the program throughout the season, a source said.